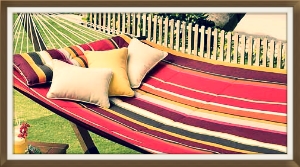 Mari took a long sip of lemonade from the straw and blindly reached out to set it on the end table next to the hammock.

“This is the life.” She sighed in pleasure.

Her eyes closed behind the sunglasses resting on her face. Raoul laughed and turned the ribs over on the grill.

“That I did,” he admitted turning to look at her. “Where’s Tyler?”

“Trying to see if he can best Devil’s Mountain without me.”

“You’ve been spending a lot of time with him.”

“It’s been awhile, but I’m pretty sure that’s what you do when you’re dating someone,” she drawled searching for her glass again.

She stopped feeling for the glass and lifted her shades to stare at him. “What is it, Papa?”

She sat up in the hammock at the improper grammar. “He treats me like a princess. What’s not to like?”

He shrugged and turned back to the food. “That’s why I didn’t say anything. It’s not anything he’s said or done. I just don’t feel…settled when he’s around.”

She frowned and propped the glasses up on her head. “What do you want me to say? I like him, the way he treats me, how he acts, all of it. There’s nothing that makes me not want to see him.”

Allison walked out the back door with a bowl of baked beans and another with coleslaw. Her smile slipped at their expressions.

“You told her then?”

“So you’ve talked about it?” Mari asked looking between the two of them.

She set the Saran-wrapped bowls on the table. “Raoul was concerned. I suggested he wait a little while to see if his feelings changed before he worried you unnecessarily.”

“And what do you think?”

“Honestly? I like him. I definitely like how happy you’ve been since the two of you got together. I don’t discount Raoul’s feelings though.”

“All we’re saying is be careful.”

An echo of Keon’s words. Mari frowned. Life was good. Her time with Tyler was great. She didn’t want anything encroaching on that, not even Raoul’s vague feelings of concern.

Raoul turned to her. “You’re old enough to make your own decisions. Have been for a while now.” He paused and scratched at his head, making her grin. “I told you what I think. What you do is up to you.”

“I know and I promise I’ll be careful.”

She settled back into the hammock, more than ready to let the subject rest. She just reached for her glass when Raoul looked toward the house.

“Why don’t you head up to the front of the house, Mari? Got a surprise for you.”

“A surprise?” she echoed curiously, rising from the hammock.

He didn’t say anything more so she crossed the grass toward the gate. That’s when she heard him.

“Something smells good back here.”

She laughed with surprise and delight when she heard that warm booming voice. The gate to the backyard swung open to reveal a tall chocolate-skinned man with jade green eyes that shone as bright as his smile. The second the gate opened she ran to him. He met her halfway with muscled arms opened wide.

“Well if it isn’t Ellie girl! I heard you finally made your way back.”

She slammed into him and wrapped her arms tight. “They didn’t even tell me you were coming! I missed you the last few times you were here. How long are you staying this time? I’ve missed you!”

Gage was a long-time family friend. Raoul and Mari took him on a tour shortly after her mother’s death and every time he visited the island, he made sure to come spend time with them. It wasn’t long before she regarded him as an uncle and she always looked forward to his visits. The last time she saw him was her graduation and she’d been equally pleased with that surprise.

They both kept an arm locked around each other as they came back to Raoul and Allison.

“Long enough to get a good look at you. That’s for sure. You’ve been growing up on me.”

Raoul snorted and eyed the ribs. “You? I watched the entire process and it still caught me by surprise.”

Gage chuckled and patted Raoul on the back. “It’s good to see you, old man. Allie, you’re just as beautiful as always.”

“And you’re still a charmer.” Allison smiled with the words.

He leaned in to hug her without releasing Mari. Only when he moved to settle into a chair did he finally let go.

“How does it feel, graduate?”

Mari dropped into a chair beside him and smiled. “It feels the same as always. I didn’t need a degree to do this. That was just…for fun I guess.”

“I’ve been thinking about letting you take over the books,” Raoul slid in easily.

Her brows jumped in surprise. “If you need me to, you know I will.”

He smiled as if he anticipated the answer as he stacked the ribs on a plate in the center of the table.

Allison unwrapped the bowls while Mari passed out the plates. She had a rib in hand with coleslaw and beans on her plate before Raoul settled at the table. Gage laughed watching her.

“I see you still pack it away.”

“I learned from the best,” Mari assured around the delicious meat. “So where’ve you been? Anywhere exciting?”

“I spent some time down in Costa Rica. Beautiful place. You’d love it. I ventured down to Colombia too. Maybe now that you’ve graduated you can come on a trip or two.”

The rib clattered to the plate and Mari’s eyes lit up. “Seriously? You better not be playing with me.”

He just smiled as he continued eating.

Mari refilled Allison’s glass as she reached for another rib after clearing her plate. Gage shook his head. He leaned back in his seat and rested his hands on his stomach. “So what’s this I hear about a man sniffing around my girl?”

There was no confusion about his source. She shot a look at Raoul. “Yes, I’m dating.”

“It’s amazing you caught her without him. He’s been monopolizing her time.”

“He’s…great.” She propped her chin up on her hand and sucked barbecue sauce from her pinky. “He makes me laugh even when I don’t want to. He’s sweet and thoughtful. He’s fun. He makes me happy.”

“All that? So what’s the problem, Raoul?”

“Call it Dad senses. They go off when he’s around.”

He frowned. “Well I can’t argue with that. I want to meet the young man while I’m hanging around, you hear?”